The Society has many awards to recognise achievements across different career paths and stages. Please click on one for more information. We also provide grants of money, such as the Angelina Messina Grant and the Frances Parker Grant.

This is the highest award of The Micropalaeontological Society. It is named in honour of George Stewardson Brady (1832-1921) and Henry Bowman Brady (1835-1891) in recognition of their outstanding pioneering studies in micropalaeontology and natural history.

The Medal is awarded to scientists who have had a major influence on micropalaeontology by means of a substantial body of excellent research. Service to the scientific community may also be a factor for consideration by the Award Committee. The medal was commissioned and awarded for the first time in 2007 to Prof. John W. Murray.

The Medal is cast in bronze from original sculptures commissioned by The Micropalaeontological Society in 2007.  The sculptor is Anthony Stones, a  Fellow of the Royal Society of British Sculptors and President (1999-2004) of The Society of Portrait Sculptors. The Medal is hand-crafted by the leading sculpture foundry Pangolin Editions of Chalford, England. 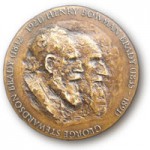 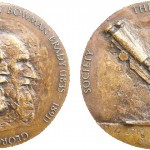 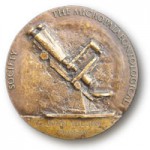 Prof. David Horne is a micropalaeontologist with expertise in ostracod taxonomy. Dave’s research interests span living and fossil material, from marine and non-marine environments, from deep time (Jurassic) to the present. He has contributed consistently to the wider academic community and to the Society, alongside pioneering academic outputs across a wide range of areas and timescales

The presentation of the Brady Medal to Prof. David Horne will happen on February 15th during the Ostracod meeting.

Previous Recipients of the Brady Medal

The Todd and Low Award for Teaching and Mentorship

The Todd and Low Award is named in honour of Ruth Todd (1913 – 1984) and Doris Low (1920 – 2008) to recognise the importance of teaching and mentorship. It was named after these researchers because of their positive mentor-mentee relationship and their commitment to equity, diversity and inclusion (EDI).

The Todd and Low Award is given to a mid-career scientist, 10-30 years from their highest attained degree (excluding career breaks), who demonstrates a commitment to teaching, mentoring, EDI and fostering a positive culture within their workplace environment. A career break for this award is defined as a substantial period of leave which would impact professional endeavours and trajectory, such as parental leave, medical leave and trying out new careers (not an exhaustive list). For the committee’s information, career breaks should be noted briefly, if known, so that the panel can assess the application thoroughly and appropriately. We would like to reassure applicants that this information will not disadvantage them and that all applications are confidential.

We value, welcome and encourage applications for this award from those in academia and industry alike.

Any information and/or EDI strategies mentioned within applications will be treated with full confidence and stay within panel discussions. The information will not be used to inform any society activities.

The award of £300 will be presented in person at the Society’s AGM in November, and one award will usually be made each year.

Previous Recipients of the Brady Medal

For information or clarification on this award, please get in touch with the TMS secretary by emailing secretary@tmsoc.org.

Presented annually to an early career scientist in recognition of significant achievement in applied and industrial micropalaeontology.

Alan Charles Higgins (1936–2004) was a micropalaeontologist and expert on conodonts who made major contributions to Palaeozoic biostratigraphy and helped firmly establish the value of micropalaeontology in hydrocarbon exploration. He was the founding member of TMS, its past Chairman and Honorary Member.

The Higgins Award is given to an early career scientist, less than 10 years from graduation, in recognition of significant achievement in the field of applied and industrial micropalaeontology, as documented by publications, software, patents, leadership or educational activities. The award has been established with the help of Alan’s family and friends to commemorate his contribution to micropalaeontology and to encourage early career researchers in the field. It will be presented in person at the Society’s AGM in November, and one award will usually be made each year. The award has a value of £300, but more importantly, it is meant to serve as a substantive endorsement of the value of the recipient’s work made by their peers. The first award was made in 2010.

Past recipients of the Alan Higgins Award:

The late Charles Downie was one of the pioneers of palynology in the U.K. and a mentor who guided the thinking and development of many postgraduate students who passed through the University of Sheffield. Through the efforts of former colleagues at Sheffield, a permanent memorial has now been established to recognize Charles’ contribution to micropalaeontology.

An annual award will be made to an early career researcher who, in the opinion of the Committee, has published the most significant paper in any journal based on their postgraduate research in the previous year. The award of £200 and a 1-year membership to the Society is made for the best paper published during each year and will be presented at the society AGM in November.

2022 Winner of the Charles Downie Award

Past recipients of the Charles Downie Award:

Subscriptions are welcome at any time; please send donations to the Treasurer.

Honorary membership will be offered to those individuals who have, in the view of the committee, made an outstanding and sustained contribution to the Society. Honorary Members receive all the benefits of normal membership of the Society free of charge for life.

To support the teaching of micropalaeontology at all BSc, MSc and equivalent levels, as well as to encourage and reward student engagement and achievement in this field, The Micropalaeontological Society announces the establishment of TMS Student Awards.

Each award consists of 1-year free membership in the Society and Newsletter of Micropalaeontology, a discount on TMS and GSPH publications, discounted registration fees at TMS specialist group meetings, eligibility for awards and grants-in-aid.

The awards are given annually by tutors of micropalaeontology courses. Only one award per year per institution may be given. Nominating tutors must be members of TMS and send a brief description of the course to the Secretary, who will confirm in writing that the given course is approved for the award. The Secretary will keep a list of registered micropalaeontology courses and confer with the Committee when necessary. Course tutors of registered courses may then give the award at any time of the year based on any criteria to students deemed to have achieved meritorious grades. The tutor reports the name and address of the awardee, as well as a brief statement on the criteria used to select the awardee, to the Secretary, who will collate a list of citations to be tabled each year at the AGM and printed in the Newsletter.

Information for Tutors: To register for a micropalaeontology course at your institute, please fill in the form and send it to the  Secretary. You only need to do this once unless the course has changed or you wish to report a different course for the award scheme. Tutors are welcome to submit the form electronically.