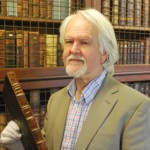 It is with great sadness we heard of the sudden and tragic death of Professor Martin Brasier. Martin was heavily involved in the early days of BMS (as TMS was previously known) as newsletter editor and in the foram group. He gave an interesting talk at the Oxford TMS AGM in November this year which covered Martin’s micropalaeontological interests. We have included a brief obituary notice from Oxford University and will be producing an obituary (in the newsletter & website) highlighting Martin’s contribution to Micropalaeontology.