TMS offers a single grant of up to £1500 each year to support micropalaeontological research by students or researchers of the Society. This grant is aimed to support stand-alone research projects and funds can be used to assist with any costs associated with the work, e.g., analytical costs, visits to museums, fieldwork, etc. This grant is open to any TMS member but if funding relates to a funded Ph.D. or Master’s project then a case must be made as to why funding is required above that already available and a letter of support must be provided by one of your advisors. This award cannot be used to support conference or workshop attendance (please see Grants-in-aid https://www.tmsoc.org/awards/).

Application for the small grant involves completing the attached application form and providing a max. 2-page CV (preferably combined as a single document). The deadline each year is the 31st October and completed application forms and CV’s should be submitted to the TMS secretary (secretary[at]tmsoc.org). Society officers will evaluate the applications and notify the successful candidate following the TMS AGM held in November. The first award was made in Nov. 2017. Funding cannot be made retrospectively. Proposals will be ranked based on the following criteria:

Successful applicants are required to submit a brief project summary (max. 100 words) suitable for a non-specialist when the award is announced (for the website and TMS newsletter), and within two years of the award date a report on the outcomes of the project for TMS Newsletter. Receipt of the award must be acknowledged in any resulting published work.

Further enquiries about the scheme can be made to the TMS secretary (secretary[at]tmsoc.org).

The boundary between Lower and Middle Triassic represents the final stages of recovery of marine organisms in the aftermath of the end-Permian mass extinction. Despite the importance of this time interval, the correlation of sections spanning this boundary is controversial, hampering efforts to understand rates and mechanisms operating during extinction recovery. Conodonts are especially abundant and diverse at the Deşli Caira section in Romania. Study of collections at the University of Bucharest will enable comparison with faunas from other important sections in China, Albania, and North America, allowing the evolutionary events of this time interval to be more accurately dated. 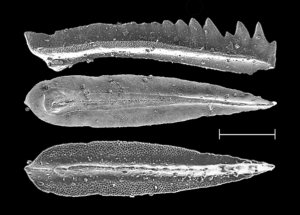 Conodonts from the Deşli Caira section in Romania (such as Neogondolella n. sp. A, pictured) allow for high-resolution correlation of the Lower-Middle Triassic Boundary (scale bar = 300μm).

Macroevolutionary Trends in Silica use by Paleozoic Radiolarians

As radiolarians rose to prominence in the early Paleozoic, they are believed to have radically altered ocean geochemistry, locking up enough dissolved silicate (dSi) that near-surface water concentrations declined by an order of magnitude between the Precambrian and the Silurian. When diatoms came to dominate in the Cenozoic and drew down dSi concentrations still further, radiolarians responded to the increasing silica limitation by constructing thinner, more porous tests. Did radiolarian morphology shift during the Paleozoic as well to reflect the reduction in available silica created by their own expansion? Qualitative observations suggest early Ordovician radiolarians were considerably heftier than later radiolarians, but there has been no quantitative analysis to back this up. Measuring the test size, wall thickness, and porosity of well-preserved Paleozoic radiolarians will test the hypothesis that there was a directional trend toward reduced silicification across the Paleozoic and improve understanding of the role of biology in the early evolution of the silica cycle. 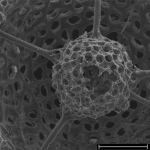 Eocene larger benthic foraminifera, mainly Nummulites, occur in multiple levels in Belgium and are well-represented in museum collections. These occurrences in the North Sea Basin are probably controlled by pulses of northward migration during warmer climate conditions. Recently, a new paleotemperature proxy has been proposed for their use in climate reconstructions, as variations in the shell chemistry can reveal both annual and seasonal changes of seawater temperature. The integration of geochemical and biotic data will define the downfall of one species and the rise of another on a NW European scale, thus linking their distribution and evolution to Eocene climate development. 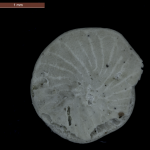 A well-preserved specimen of Nummulites aquitanicus from the Egem sands in the Ampe Quarry near Egem (Belgium), deposited during the early Eocene climate optimum (EECO).