The Journal of Micropalaeontology

The Journal of Micropalaeontology (https://journal-of-micropalaeontology.net/index.html) is an established international journal publishing primary research since 1982, and is wholly owned by The Micropalaeontological Society. The journal covers all aspects of microfossils and their application to both applied studies and basic research. In particular we welcome submissions relating to microfossils and their application to palaeoceanography, palaeoclimatology, palaeobiology, evolution, taxonomy, environmental change and molecular phylogeny. The scope of the journal is broad, demonstrating the application of microfossils to solving broad geoscience issues.

The Journal of Micropalaeontology is fully open access, and is currently published by Copernicus Publication (https://publications.copernicus.org/). 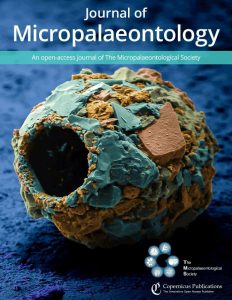 Microfossil assemblages and geochemistry for interpreting the incidence of the Jenkyns Event (early Toarcian) in the south-eastern Iberian Palaeomargin (External Subbetic, SE Spain)

The Newsletter of Micropalaeontology 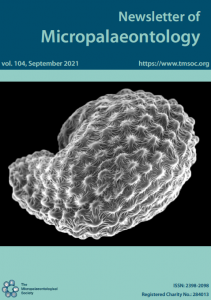 From 1973 to 1998, the Society published its own micropalaeontographical series: A Stereo-Atlas of Ostracod Shells, (first produced in 1973, edited by Professor Peter Sylvester-Bradley and Dr David Siveter of Leicester University), it also produces an occasional series of field guides.

The BMS produced a circular until 1976, when the Newsletter was inaugurated, as The British Micropalaeontologist, first edited by P.J. Bigg. The newsletter was renamed Newsletter of Micropalaeontology in 1995. The first BMS publication (apart from the A Stereo-Atlas of Ostracod Shells) was A Stratigraphical Index of British Ostracoda (edited by Ray Bate and Eric Robinson) which appeared in 1978 and was published as a Special Issue of Geological Journal. Subsequent volumes have been published as a Special Publications Series, commencing with the Stratigraphical Atlas of Fossil Foraminifera (edited by Graham Jenkins and John Murray) in 1980. These are available to TMS members at discounted rates.

The year 1982 is a milestone in Society history as this saw the initiation of the society’s own journal, the Journal of Micropalaeontology, (first edited by Lesley Sheppard). The Journal was initially produced once a year, but since 1984 has become a twice yearly publication of growing international repute. The editor and the editorial board will consider for publication original papers and review articles dealing with all aspects of Micropalaeontology.

Commercial and ‘situations vacant’ advertisements may be placed in all society publications. The rates are as follows:

Online Recruitment Avertisement £50 (accessible here) – recruitment advertisements appearing in the newsletter will also appear on the website at no extra cost.

Proposals for upcoming special publications and information from the Editors.

This is the seventh special publication in the TMS series published by the Geological Sociejty Publishing House, 16th June 2017

Microfossils are an abundant component of the sedimentary rock record. Their analysis can reveal not only the environments in which the rocks were deposited, but also their age. When combined, the spatial and temporal distribution patterns of microfossils offer enormous utility for archaeological and forensic investigations. Their presence can act as a geological ‘fingerprint’ and the tiniest fragment of material, such as a broken Iron Age potsherd, can contain a microfossil signature that reveals the geographical source of the materials under investigation. This book explores how microfossils are employed as tools to interpret human society and habitation throughout history. Examples include microfossil evidence associated with Palaeolithic human occupation at Boxgrove in Sussex, alongside investigations into human-induced landscape change during the Holocene. Further examples include the use of microfossils to provenance the source materials of Iron Age ceramics, Roman mosaics and Minoan pottery, in addition to their application to help solve modern murder cases, highlighting the diverse applications of microfossils to improving our understanding of human history. 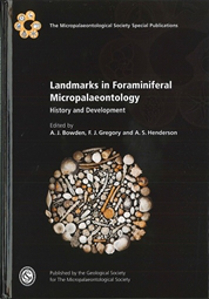 This is the sixth special publication in the TMS series published by the Geological Society Publishing House, 19th December, 2013.

This TMS Special Publication comprises a collection of 23 papers with an international authorship reflecting on landmarks in the history and development of Foraminiferal micropalaeontology. The volume is prefaced by an introductory overview that provides a brief and selected historical setting, as well as the intended aims of the book.

Selected developments in Foraminiferal studies from a global perspective are presented from the time of Alcide d’Orbigny and the founding of the Paris MNHN collections in the mid-nineteenth century to the use of foraminifera in industry, other museum collections, palaeoceanography and environmental studies, regional studies from the Southern Hemisphere and the rise and fall of significant research schools. The book concludes with a chapter on the modelling of foraminifera.

Landmarks in Foraminiferal Micropalaeontology: History and Development will be of particular interest to micropalaeontologists, other Earth scientists, historians of science, museum curators and the general reader with an interest in science.. 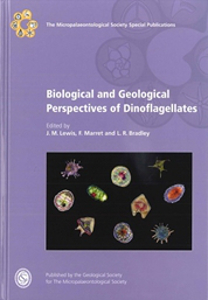 This is the fifth special publication in the TMS series published by the Geological Society Publishing House, 4th December, 2013.

This volume provides an overview of current research on fossil and modern dinoflagellates, as well as highlighting research areas for future collaboration, following the DINO9 International Conference in Liverpool. The volume is organized into four themes, with a review paper for each theme written by the key-note speaker. Each theme also includes a future research foci note following discussion during the conference.

The contributions are organized into the following sections: environmental change, ecology/palaeoecology, life cycles and diversity, and stratigraphy and evolution. Also included are notes from two workshops: culture experiments and dinocysts as palaeoceanographic tracers.

This volume will be of interest to both the biological and micropalaeontological communities. 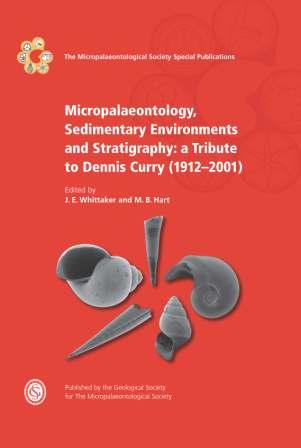 This is the fourth special publication in the TMS series published by the Geological Society Publishing House, 17th September, 2010.

Dennis Curry was a remarkable polymath and philanthropist, leading a double-life as one of the UK’s most gifted amateur geologists, whilst at the same time being an extremely successful businessman (as Managing Director of Currys Ltd).  This Festschrift, authored by friends and specialists from Britain and France, pays tribute to his often seminal research as well as exhibiting the wide range of his geological interest.  It contains 12 chapters and covers several differing aspects of micropalaeontology (pteropods, diatoms and especially foraminifera), Strontium Isotope Stratigraphy, Hampshire Basin stratigraphy and palaeogeography, as well as major contributions on English Channel sedimentology and the great faunal turnover affecting mammals at the Eocene-Oligocene boundary.  A scientific appreciation of Dennis Curry, “the professional amateur”, with recollections of former colleagues at University College, London (where he was Visiting Professor), together with an assessment of the valuable collections he established and donated to The Natural History Museum, are also included.  Copiously illustrated, this book is a must for all geologists. 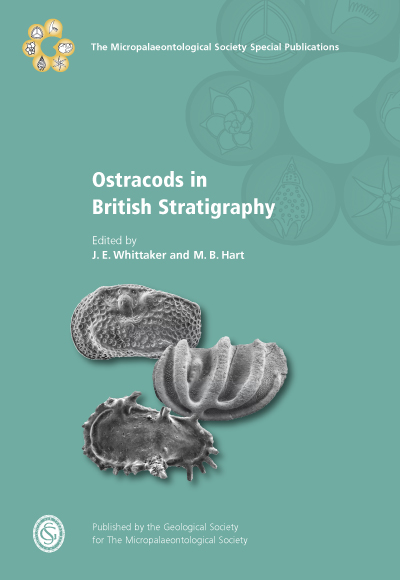 This is the third special publication in the TMS series published by the Geological Society Publishing House, 9th June, 2009.

This book charts the stratigraphical distribution of ostracods in the Cambrian to Pleistocene deposits of Britain and outlines their utility for dating and correlating rock sequences, as well as indicating aspects of their palaeoenvironmental and palaeogeographical significance.  These small bivalved crustaceans are the most abundant arthropods in the fossil record.  Indeed, the stratigraphy of Britain, which embraces many type-sequences, provides a particularly rich and full record of them, from at least the basal Ordovician, and from the British Cambrian there is a biostratigraphy based on their ‘relatives’, the bradoriids and phosphatocopids.  Ostracod distributions demonstrate the ecological success story of the group, occupying as they do marine, non-marine and even ‘terrestrial’ habitats. Written by current specialists in the field, this book is an authoritative account and will be welcomed by all micropalaeontologists and applied geologists in the industrial and academic world alike. It is richly illustrated with over 80 plates of electron micrographs and specially drawn maps, diagrams and range-charts.

This is the second special publication in the new TMS series published by the Geological Society Publishing House, 5th December, 2007.

This book unites climate modelling, palaeoceanography and palaeontology to address fundamental events in the climate history of Earth over the past 600 million years. Understanding the ‘tipping points’ that have lead to rapid changes in the Earth’s climate is vitally important with the realization that humans modify global climate. In an effort to better understand past and future climate change, general circulation models have become the forerunners of attempts to simulate future climate. Although extraordinarily sophisticated, they remain imperfect tools that require ‘grounding’ in geological data. In this, the study of past major climate transitions like the Palaeozoic icehouse worlds and the extreme greenhouse of the Cretaceous are invaluable. Both the mechanisms that forced changes in the Earth’s climate as well as the proxies that track these changes are discussed. The central message of the book is that general circulation models tested with geological data in an iterative ‘ground truth’ process provide the best estimates of the Earth’s ancient climate.

This is the first special publication in the new TMS series published by the Geological Society Publishing House, 25 November, 2005.

The application of biostratigraphy to hydrocarbon exploration and development has become increasingly important both scientifically and economically. The demand for higher stratigraphical resolution in field development studies has resulted in the utilization of new approaches. The aim of this volume is to encourage an exchange of ideas and to seed new research initiatives particularly within integrated multidisciplinary teams. The papers are divided into four main themes which cover a broad range of modern applications of biostratigraphy. The first three themes are: UK North Sea field development; outcrop analogues; and international exploration and development. The final section discusses new methodologies, such as the application of correspondence analysis and multivariate correlation of wells, and palynological processing techniques applicable to the wellsite.

The first Special Publication of TMS (then the BMS) was A Stratigraphical Index of British Ostracoda (edited by Ray Bate and Eric Robinson), which appeared in 1978 and was published as a Special Issue of Geological Journal. Subsequent volumes have been published as a series, commencing with the Stratigraphical Atlas of Fossil Foraminifera (edited by Graham Jenkins and John Murray) in 1980. Ten further Special Publications were published for the BMS by Ellis Horwood Ltd., and from 1990 to 2001 seven were published by Chapman and Hall/Kluwer. During this time, stratigraphical indices or atlases have been produced for ostracods, foraminifera (2 editions), nannofossils, conodonts and dinoflagellate cysts, as well as several thematic volumes. Our Special Publications are now being handled by the Geological Society Publishing House, the first of which was published as TMS001 in November 2005.

The following titles are out of print:

Note: These field guides were produced for the pre-and post-Symposium field excursions but are all now out of print. They can now be accessed digitally via the Biodiversity Heritage Library (https://www.biodiversitylibrary.org).

The Stereo-Atlas of Ostracod Shells

The Stereo-Atlas ceased production in 1999 after 25 years

A Stereo-Atlas of Ostracod Shells was published between 1973 and 1998, 25 volumes in all. The Society does not retain any back issues.

A cumulative index for volumes 1-25 has been produced and was circulated with volume 25.

This site uses cookies to help us keep this site bug/error free I would like more info, please