Report on the 16th International Symposium on Ostracoda 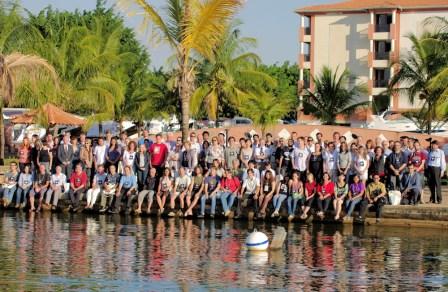 The 4 invited lectures were presented by K. Martens, Belgium (Zoogeography on non-marine Ostracoda), R. Matzke-Karasz, Germany (Synchrotron holotomography ostracods in research – an assessment of prospects and limits), J.-P. Colin, France (Marine ostracods at the K / T boundary: state of knowledge) and J. Salas, Argentina (Diversity Patterns of Ordovician ostracods from Argentina). The prize for best oral delivery for students (Sylvester-Bradley award) went to Laurent Decrouy Lawrence (University of Lausanne, Switzerland) for his brilliant presentation “Controlling factors valve geochemistry of ostracods: insights from analysis of live species in Lake Geneva (Switzerland). It must however be noted that although the year 2009 be the Year of France in Brazil, only 2 representatives of our countries attended this international event (including one whose travel and subsistence was paid by Brazil ? guess who!,  the other an unemployed enthusiastic post-doc who paid from his own pocket!).

Oral presentations will be published after approval in a special issue of the journal Hydrobiologia In addition to the oral sessions and poster presentations, participants have visited the city of Brasilia, capital of Brazil, the work of architect Oscar Niemeyer and urban planner Lucio Costa, which will turn 50 in 2010. A workshop entitled “Procedures in micropaleontologic curatorship” was also organized by G. Miller the Natural History Museum in London. In replacement of Koen Martens whose term expired, Renate Matzke-Karasz was elected new president until the next Congress IRGO (ISO 17) to be held in Rome in 2013 and is organized by Elsa Gliozzi University of Rome (Italy).