A good mixture of students, academics and consultants attended this very successful meeting of TMS Ostracod Group in Leicester. The meeting ran over a weekend, with an afternoon of talks and two morning visits to local scientific sites.
The Friday evening started with many attendees visiting the Leicestershire village of Leire where we were superbly hosted by David and Pauline Siveter; indeed it was a family occasion, several wives were present and many of us stayed with the Siveters over the weekend period, the main result of which was a serious assault on the eminent Professor’s wine and whiskey supplies (thanks David). 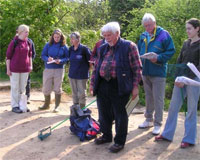 It was thankfully sunny for the Saturday morning fieldtrip, a visit to Groby* Pool (north of Leicester) to collect some Recent ostracods. This may have had its origins in a medieval fishpond. Today it is a SSSI to protect birds and other wildlife, but the ostracods have been rather neglected, until now that is (as far as we know there are no published records of living ostracods form Leicestershire). Leicester undergraduate Katy Gosling will be doing her third year dissertation on the ostracods from the pool. We sampled from various sites, with the knowledge of local expert Roy Clements who helped us identify freshwater gastropods and molluscs (see summary of molluscs at end of this report). Ostracods were present, although only one could be recognised in the field, a species of Herpetocypris (after all it was over 2mm long!). We look forward to learning more about the populations from Katy in due course. 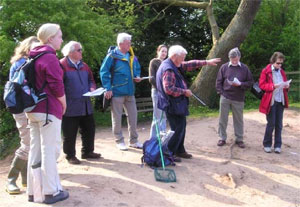 We gathered on Saturday evening for a first class dinner at the White Horse pub in Leire, Leicestershire (David Siveter was clearly well-known by the proprieter). The meal and fine wines were much needed and appreciated after a hard day of fieldwork and discussions. A wonderful evening was had by all, and sleeping accommodation at David Siveter’s house was fortunately within staggering distance!
On Sunday morning part of the group travelled to the British Geological Survey in Keyworth, for an informative two hour tour of the facility with curator Mike Howe and micropalaeontology researcher Ian Wilkinson. At the National Geoscience Records Centre Ian Wilkinson gave a brief talk on the history of the BGS, and Mike Howe showed us some of the many online databases that are available, including geological maps and borehole records. We walked through the huge core store and later had a chance to peek through the palaeontological collections, housed in beautifully preserved antique cabinets, with larger specimens out on display.
The good attendance, friendly atmosphere, large number of talks and fine weather helped make it a special meeting to remember.