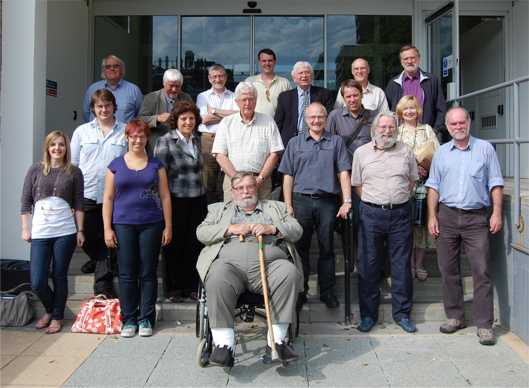 The meeting was organised and hosted by David Siveter and Mark Williams in the Department of Geology, University of Leicester. Our thanks go to David and Mark for this and to the university for allowing us to use its facilities. With over twenty people and ten talks this meeting, following on from the well-attended meeting in October 2010, marks a sustained resurgence in activity. Matt Wakefield (BG Group) has kindly provided a concise summary of the talks: Alan Lord  & Maria Cabral (University of Lisbon) presented “Ostracod evidence and the Neolithic environment of Rio Sizandro, western Portugal”. The work was based on borehole material from around Benfica that penetrated river valley deposits, dated at c. 6500-6100yrs BP, which cut into Upper Jurassic strata. The area was originally flooded with sea-water but following a sea-level fall (6-7ky BP) the valley began to fill with sediment, some of which may have been agriculturally mediated. Brackish water ostracods were present in the base of the succession including Cyprideis torosa (un-noded) and Leptocythere porcellanea with occasional Callistocythere murrayi. Rare, poorly preserved freshwater ostracods (Ilyocypris bradyi, Ilyocypris inermis – a first record in Portugal, Limnocythere inopinata and Darwinula stevensoni) were also present.