Day 1 started with a visit to an estuary at Kyleakin to collect living brackish ostracods before visiting the coastal SSSI at Ob Lusa. Here Torridonian sandstones unconformably underlie Hettangian – early Sinemurian strata, which contain the classic Ob Lusa Coral Bed. The group motored across Skye to the south west coast bay at Elgol, sampling en route Toarcian Portree Shale claystones at a roadside cutting beside Loch Slapin and encountering the island?s vicious predators, Culicoides impunctatus  – Highland Midges. We were able to offset much of their attack with a “So Soft Skin” spray, but beware chaps, because one member remarked, “Oh, it makes you smell lovely!”. Death by a million midge bites sounds almost preferable! Most of the afternoon was taken up in the west coast bay at Elgol, where splendid foreshore exposures of Bajocian – Bathonian (Great Estuarine Group) deltaic and lagoonal clastics were viewed in gloriously sunny weather. Here abundant specimens of conchostracans, darwinulids (alicenulids) and even stromatolites could be seen in the Lealt Shale Formation, a locality featured in Matt Wakefield’s studies. 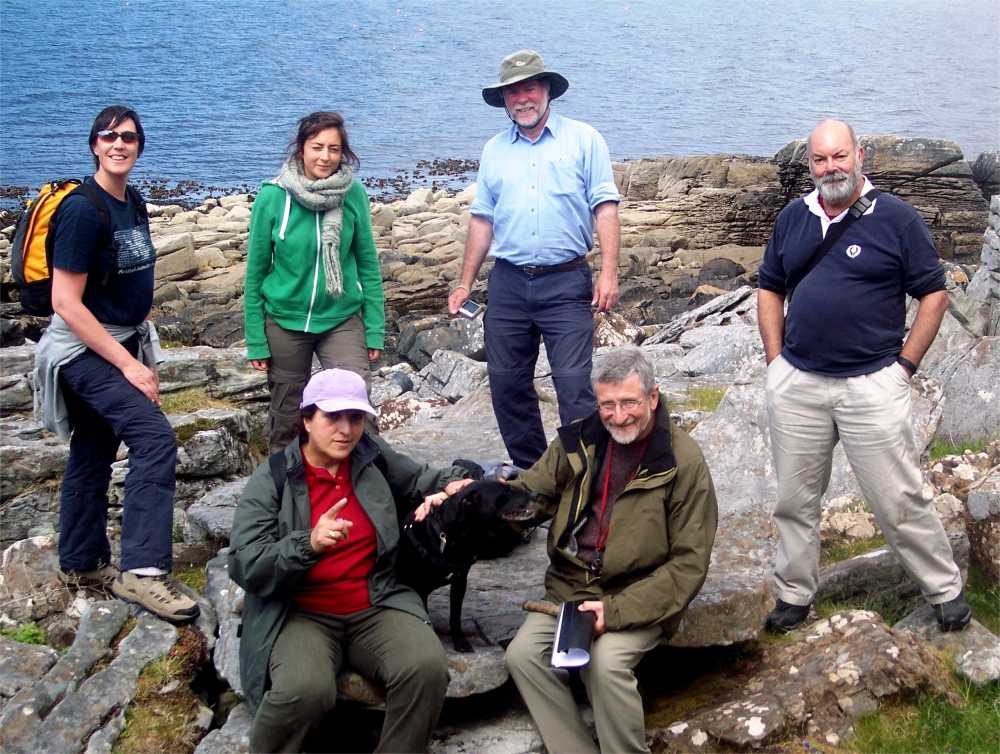 Such was the interest in the palaeontology and geology of this bay, that the group agreed unanimously to remain there rather than visit Skye’s Talisker Distillery. Now, a decision like that must be a first for any ostracod field trip! We took in spectacular Torridonian fluvial sandstone sedimentary structures on the delightful single track road which leads to the old ferry at Kylerhea. This winding road puts you in mind of the one travelled by Richard Hannay (Robert Donat) in Hitchcock?s 1935 version of “The Thirty-Nine Steps”.

On Day 2, we journeyed to the north of the island to collect from Robin Whatley’s now classic Staffin Bay location, where material from the marine Callovian – Oxfordian Staffin Shale Formation is exposed in cliffs and across the rocky foreshore. We visited Kilmaluag Bay, where brackish lagoonal clastics of the late Bathonian Kilmaluag Formation yielded specimens of (amongst others) Theriosynoecum spp., clearly visible on bedding surfaces. The final highlight of the day was at an idyllic setting on a coastal meadow bedecked with Ragged Robins and Northern Marsh Orchids beneath the ruins of Duntulm Castle, erstwhile home of the Macdonalds. Here a freshwater seepage yielded up specimens of the living endemic British ostracod Psychrodromus robertsoni.

Mention must also be made of the leaders’ restaurant choice. On Kyle Railway Station is “The Seafood Restaurant”, where excellent fresh produce is served. This location provided the perfect finale to both days.

It is hoped that Alan and Dave will run this trip again as it maintains the Society’s high standards, and is of interest not only to ostracod workers for the abundance of its microfaunas but also to explorationists for its range of Hebridean Basin Jurassic strata of marine, deltaic, lagoonal and fluvial origin.

And finally, for those old enough to remember, the Rent-A-Wreck Award for crashing a car (amongst previous winners are Eric Robinson and Tom Kilenyi) remains in abeyance as no damage to vehicles was reported, despite the narrow switchback roads we encountered on Skye.